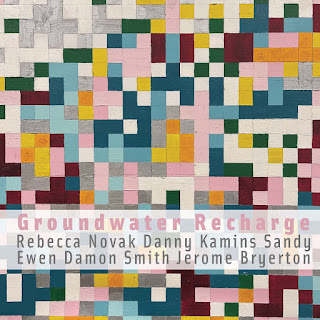 Billed as “improvised music for quintet (+trios)” this is an excellent example of what’s meant by collective improvisation. All five players (six with Aluana Rubin joining on clarinet for one track) are given, and give, space to explore and collaborate. – LRE

DS: Groundwater Recharge is a window into what we were doing in Houston at that time. If Dave Dove was on that record, it would be even more of a clear window of what we were doing. But that was something where we had access to a really good studio, and Byerton came to town, and then these were the people that were there, Sandy and Rebecca Novak, who was in the Gooseberry Marmalade and wrote those liner notes. Sandy and Rebecca and Danny Kamins and I were doing a lot of different things together at the time and maybe even getting together and playing, which I don’t do as much. It’s just when I’ve got concerts, I feel like it’s more important for me to practice at home and be ready for those concerts than to sort of do private sessions. I don’t do a lot of that because I think it becomes, at a certain point, also work-life balance. If I’ve got concerts on the books and I’m practicing and then I’m listening, then it might be more important that I have a bike ride that day. I do get together and play with people privately. It’s just important to make sure that you’re ready in different ways. Rebecca Novak is a really interesting and important improviser in Houston, and she has a degree in French Horn and took that to a really high level in orchestral playing and classical music. But she’s always been interested in this music. I believe she was roommates with Tim Mulvana who was the original drummer of the Vandermark Five in Chicago at a certain point. And then she took time off of music to really develop a visual art practice. It was primarily as a sculptor. And now she brings those things together in a lot of ways with installations and things like that. But also in concert, she’ll have these objects like glasses and other objects in addition to Cornet and piano. But of course piano is such a hard thing because there’s not a piano at every venue, but there was a piano in the studio. So she was able to play some piano on this album. But it’s good to get that out because she’s a really important musician and artist in Houston and because of the way that her music sort of overlaps with visual art and back, it’s not super easy to document exactly what she does. When I was in Houston last, she was doing a really incredible installation at Project Row House, which I felt really captured the whole picture of what she works on. She’s an amazing person to work with. And then, of course, it’s got a cover by Bryerton, a painting by Bryerton. I think it’s really beautiful, and Rebecca came up with the titles for this one, too. So the titles have to do with her work in environmental justice. 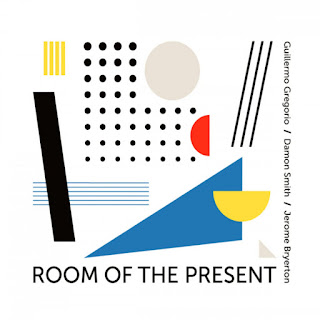 A must have recording of Smith and Bryerton in a trio with the great Argentine reedsman Guillermo Gregorio. Mainly trio improvisation, Gregorio conducts on “Moholy 2”, a graphic score he wrote inspired by the life and art of László Moholy-Nagy which is reproduced inside the cover. This is an exceptional release and really one of my personal favorites as I’ve returned to it numerous times. The trio is phenomenal and this album is just as patient in its small interactions as it is in its more explosive parts. The liners also give the listening notes for how the score was interpreted, as well as providing some insightful information on Moholy-Nagy himself. – NM

DS: Of course, Bryerton and I have been working together for many years. And if we talk about this album with Gregorio, Bryerton, and I had been working with Wolfgang Fuchs in a trio, Bryerton was living in Chicago and these recordings were done in 2006 and 2007, I believe, or 2007 and 2008, something like that . And one of the most interesting musicians who was in Chicago at that time was Guillermo Gregorio. I don’t know if you know, do you know his Hat Art albums and things like that.

DS: It’s just fantastic. And I really love his music and I love his compositions and I love his concepts. And again, an original voice. And I love the intersection of this kind of Fluxus avant-garde thing, which was the Argentinian movement was called Madi Madi, and it was kind of a constructivist Fluxus thing that was really incredible. But then he also has a cool jazz-like way of playing and thinking, which is fantastic. And what’s nice there is the Moholy pieces are prior to that. Our first duo recording is actually on this. And Gregorio is, and my girlfriend Melissa Venator did the liner notes. She is a Moholy scholar, actually. And one of the chapters of her dissertation was on Moholy, and when she was at Harvard, she got to activate the Moholy’s light prop, which the Room of the Present is in reference to the title. And she wrote liner notes that are analyzing the visual aspects of the score in relation to Moholy’s work, which is really cool. And then the other interesting thing about this is we get a pretty fiery performance out of Guillermo on the improvisations, which is really exciting. And another interesting thing is right before this call, I just confirmed a concert of this group in May in upstate New York that Clifford Allen’s putting on. So that’s going to be pretty exciting as well. This group will be able to work a little bit.

Bryerton/Smith Duo – There Must Be A Reason for Generating Sounds (Balance Point Acoustics, 2021) 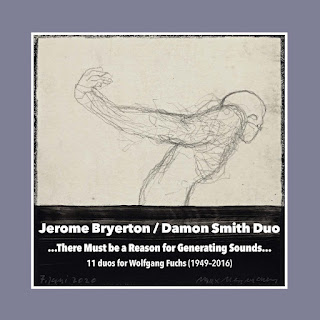 Bryerton and Smith are powerful foils for each other, each one as restrained and fiery as the other, in this intense, touching, and searching tribute. – LRE

DS: We dedicated this to Wolfgang Fuchs, Bryerton and I had done a lot of different things with great players beforehand, actually the earliest recording of Bryerton is on one of my earliest recordings is called Sextessence with John Butcher and Henry Kaiser. On that album, we’re doing John Stevens material and trying to improvise them. The first figure that we both work together with closely as a rhythm section or whatever you want to call what we do. John Cage used to have this saying that you don’t have to call it music if the term offends you, so you don’t have to call Bryerton and I a rhythm section of the term offends you. (laughs)

NM: I did watch some of your videos on your YouTube channel. I think you had at least one from Minneapolis, right? Yeah, it was really good.

DS: Yes, that was a great trio. And we could just set up and we could play anywhere and play that music. And it was such an important experience to work with Fuchs. And Fuchs is such an important figure. Not 100% forgotten, but I would say he’s not in the front of everyone’s mind about this music. But I think he’s one of the very important figures in this music. And he was very serious. He had a great sense of humor, but his attitude towards the music was a little too serious for some people. And he could be a bit of a hardliner about improvisation and stuff like that and a bit spikey, kind of offended a lot of people. And the titles are things that he said, which were all really funny things. But he was close friends with the artist Max Neumann, who did all of his FMP covers. And we were able to get four drawings from Max, which is really nice. Four drawings from Max, which this album has a gatefold and all that with these drawings, which is really great.

NM: Yeah. I didn’t realize that he and Newman were friends.

DS: Yeah, right. The cover to the first King Ubu, not the LP. It’s like a more kind of a drawing, black and white. But the first CD with the two figures on it, and then also Fuch’s solo on FMP, those are so iconic and so amazing. So it’s great to get those for the covers. And the CD comes with the bookmark, which I’m really excited about. It’s kind of funny to me at this point in my work, and I’m just excited that I was able to make a bookmark, but I’m always looking for a bookmark, and I don’t have one. And now I have all these bookmarks with this banner on it that Fuchs made. There must be a reason for generating sounds. And I think that’s kind of a great thing. I’m using them in all kinds of books. It’s a very useful item. This is something we did last year. Bryerton is in Chicago. I’m in St. Louis now.