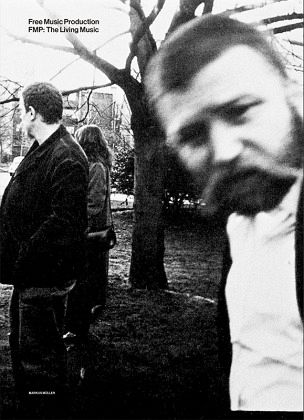 An Interview with Markus Müller about the book FMP: The Living Musicreviewed here.

Mr. Müller, the FMP exhibitions in Munich in 2017 and in Berlin in 2018 were a wonderfully created and fantastic look back at the wok of FMP. How and when did the decision to also do a book come about?

Funny enough it was just the other way around: I wanted to work on an FMP book for the longest time, but never having really published a book without an exhibition driving that kind of effort, I never made it across the initial, the essential first threshold. Okwui Enwezor simply had enough of me just talking about it and asked me to realize an exhibition on FMP at Haus der Kunst, the accompanying catalog, that was his rational, would take care of my book idea, period. After Okwui was, as I would say, forced to leave the Haus, the funding for the book was in administrative hibernation.

You mention in the introduction that Machine Gun may have been the first recording you heard from FMP. At the time did you think about the label being somewhat special or were you just listening to an album?

Yes, it was something special. Maybe for all the wrong reasons though. I was very much into what was called Heavy Metal and Blues. I oscillated, I am not ashamed to say, between “Kiss Alive!” and Hound Dog Taylor, electric blues. We are talking 1975, so one year before the Ramones debut. And I just connected immediately to Machine Gun because over the intense hyper-energy-level it exuded. This thing was just so on fire and it still is. It was clear that I had to follow up on this, hear more, learn more about this.

Was there something about FMP that interested you the most? The concerts, the festivals, the recordings, or possibly something else?

I grew up in the Ruhrgebiet so it was records before concerts, Berlin was not only 600 km away, there was also this border…later on I got almost addicted to listening to the live experience, not almost I got addicted, especially to the experience of being able to listen to a set of musicians repeatedly, aka the Workshop Freie Musik-configuration, so I got addicted up to a point where I couldn’t afford to travel to listen to FMP-related musics anymore and had to realize that writing about this stuff will not pay the rent…thus I had to get my first job at the Karl Ernst Osthaus-Museum in Hagen.

Especially during the so-called cooperative period, there were sometimes tensions at FMP because Peter Brötzmann came from a political background at the beginning, while Alexander von Schlippenbach was rather apolitical. Despite Brötzmann’s influence, would you say that the political became less and less important for FMP over the years?

I strongly do believe that everything that FMP has done was political and it is political till this day. FMP has been an example for self-empowerment, so for me the political has multiple implications and this example of self-empowerment is central for my understanding of what politics can do. And yes there were tensions but fascinating enough these guys still play together every once in a while and I think there is also a lesson to be learned from that.

FMP was very present in West Germany, especially in the late 1970s and the 1980s, because the label could – as you say – set accents. You briefly mention that there was also a discussion that FMP fuelled displacement struggles. What exactly is meant by that, and to what extent would you agree?

I think that Jost Gebers for example, always wanted to include, to present musics that are contemporary and relevant, no matter where they came from. This necessarily had to be in sharp contrast with the intrinsic interest of any musician in an economy that makes it almost impossible to make a living by “just” playing your music. You always want to be the one who gets the gig, especially in your “own cooperative”. This let to internal conflicts. If you are outside of the FMP-bubble the sheer massiveness and number of FMP-related events, presentations, and publications condemns the outsider to think: “Why always them, why always FMP?”. And as the economic situation was and is limited by definition, more FMP was perceived to mean there is less for others. The Kölner Stadtgarten is the prime example of an initiative that was begun, I believe, very well knowing the FMP-example but also in stark delimitation to FMP and thus managed to out-live FMP as it took steps that in some ways even necessary reached further than FMP did. The lesson being: real-estate is real.

One chapter that is certainly important, because there is a focus on a rather underrepresented aspect, is the chapter on FMP and women. You say (quite rightly) that FMP as an organization has never been feminist, but proportionately has given many women opportunities to present themselves. Was anything else beyond that even possible at that time?

Yes, that is a very good question and I believe you are pointing in the right direction. I just think that as a white privileged male today one always has to acknowledge that these privileges are part of what I would call systemic racism and systemic misogyny. One has to raise these questions and yes, I am pro-Quota.

In this context, do you think a chapter on sexual diversity would have been useful? Cecil Taylor and Irène Schweizer, for example, never made a secret of this.

Absolutely! And I believe Christian Broecking outstanding and exemplary biography of Irène Schweizer does an excellent job in this regard. And it should be done and it has to be done. Having said that, I hope there will be more studies, books, research focused on FMP, and other initiatives like FMP covering this specific question and then some. My book is far from trying to be definitive, there was only so much that I could do. I wanted to introduce FMP in a way that makes it possible to understand that this is an important history. If others pick this up and do more and better in the future: all power to them!

One chapter deals exclusively with FMP and border crossings. Could FMP perhaps be described as the first real example of globalization in jazz?

I am not sure about that, the question makes me think immediately of Joe Zawinul, Joe Harriott, Django Reinhardt, Gábor Szabó etc. etc. I also believe that AACM did similar things, integrating dance, performance, and also painting, visual arts and I think that I believe that the arts always intermixed with Fluxus being the one moment were things really crystallized and Fluxus was definitely global. And that is, in part, were FMP is coming from. Plus, let us be clear, when you live in a village, and Wuppertal, sorry, was a village compared to Manhattan, and you have Brötzmann, Kowald, Carl, and Reichel on the one hand and Pina Pausch on the other hand, how These folks could miss each other, they had to collaborate at one point.

Some chapters, such as FMP and the GDR, also live on almost unbelievable anecdotes. Were there also some that you had to leave out because they simply didn’t fit in, but that would have been well worth telling?

Yes, when you work on something for such a long time, people begin to tell you stories because they know that you will not publish them, I think this is a matter of simple trust. And in some cases, for example in all questions of publishing stuff about FMP finances, I cleared that. And on the other hand I was never asked not to write something or to delete something. In other words, I am sure there are things not in the book that are worth telling but this whole brick is also about reduction and commensurability.

said in an interview that Jost Gebers has achieved incredible things for improvised music. Many people (including himself) had complained about FMP in the 90s because they thought they were not very open to new musicians. Today, he sees it differently: it was good not to change a successful model. But more importantly, he said, everyone has benefited indirectly from the FMP structures, that the FMP existed, mainly because of its structures. Many musicians forget this and lightly brush it aside today. Do you see it that way as well?

I think I kind of answered that already. One of the problems with a success story like FMP is that those who feel they are outside the loop always want in, always want more. Hell, the ones who were in the loop always wanted more, they felt they were not getting enough. This dilemma cannot be solved, with limited funding for example, come limited possibilities of presentation and representation. I, on the other hand, think that it is very remarkable indeed how much diversity there was inside of that FMP fold.

Regarding the years 2000 to 2009, you only refer to an essay by Wolf Kampmann, which rather reflects Jost Gebers’ view. Why not let Helma Schleif, who took over the FMP after Gebers’ withdrawal, have her say as well (even if only with a reference)?

In this specific case there are not only different views but there was also a lawsuit up to the Supreme Court of Appeal. Jost Gebers has won all these hearings and has rightfully canceled the license agreement with Helma Schleif due to the ongoing violation of the initial contract. This is the factual side of the affair and I really had no interest in repeating things that are easily available online etc. Once you are in court together, niceties usually end.

I think it was a mistake on both parts to hope that FMP could somehow go on and continue as if the world had not fundamentally changed. Gebers has received the first institutional funding for FMP only in 1989. After 1989 things changed and in the funding of the arts in general, worlds were turned upside down.

Having said that, I think that the years 2000 (and TMM Compact 2000 with Olaf Rupp by the way, is in the book) to 2009 produced a couple of great concerts but also failed to add a new chapter to the FMP legacy and I am happy if someone proofs me wrong here.

It is remarkable that Brötzmann’s Chicago Tentet started in 1998 and ended in 2013, maybe that was a bit like the AACM going to New York and then eventually to Paris etc. What does it mean that one of the most costly (and successful) FMP-related endeavors happened while FMP changed stewardship and when they played Berlin, twice I think, they played Jazzfest Berlin 1999, I can’t remember where they played in 2012?

Do you think something like FMP would be possible again today? Or have the social and production possibilities simply changed so much today that it would no longer be possible?

I think Berlin has an Improv Scene that outnumbers the FMP years in terms of number of players and numbers of concerts by far. There is also a brand new young audience that is very diversified and most significant difference to the “classic FMP years”, there are a lot more women in the audience today.

Maybe an obvious final question: Do you have something like favorite albums in the FMP catalog?

Yes. I give you a couple, but be sure, tomorrow I would give you ten more…

Thank you very much for the interview, Mr. Muller.