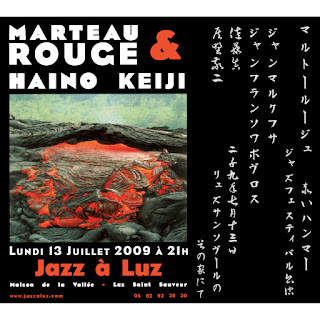 I’m sure we’ve all been in the situation of being asked who our favorite artist or band is and the answer is always complicated. With so many great artists you could name in every possible musical style and genre even in making a top 10, 20, 100 or hell, 1000 you’re never sure of your picks, always afraid of leaving out someone whose music you love; so you don’t bother, you say you like all kinds of music and artists and you hope the answer is satisfactory to whoever asked it. This is what I almost always do and it gets me by most times.

There is however one artist who has had a profound influence on me, both as a listener and a musician, with his hundreds of hours of recorded material spanning his free jazz beginnings, solo guitar explorations, innumerable collaborations, noise, drone, percussion and much more, and this person is of course Keiji Haino. This is why I’m honored to be able to write my thoughts on a release he participated in, a collaborative album recorded live with French trio Marteau Rouge, comprised of Jean-Marc Foussat on synthesizer, toys and vocals, Makoto Sato on drums and Jean-François Pauvros on guitar.

With the introductions out of the way we need to discuss how to approach this review. Even before listening to the album I knew I would have lots to talk about but after a few attempts at writing a piece I would consider decent I noticed all I could really do was regurgitate the same compliments for a few paragraphs without communicating anything besides the fact that I think it’s very good.

Since this is a live album and what it does best, in my opinion, is make you feel like you’re in the room as the band plays (also thanks to the fact that while it by no means sounds bad this is clearly not a soundboard recording and has a lot of rawness to it) I thought I could try and walk you through it, almost like this is a review of a concert we’re all attending together.

‘Annonce’ lives up to its name: it introduces the band and the palpable and gritty room recording quickly and it’s over with.

We then go to ‘A’, Foussat’s synth chirrs and pulsates as Sato starts hitting his toms and cymbals. If you didn’t know the lineup you might think someone was playing a saxophone but what you’re hearing is actually just Pauvros’ expertly processed guitar. Then some slow, deliberate notes come in, with their signature reverb attached: Haino has joined the band. The group builds to a steady rumble, the synth and drums keeping the two guitarists from straying too far from the rest.

On ‘B’ what was once a sax has now been transformed into a violin. I have to admit I was fooled for a moment by Pauvros’ treatment of his instrument and had to go double check the liner notes to see if there really wasn’t a violin. As tension builds Foussat starts singing through a heavily distorted microphone, like a message sent back through time from a not too distant dystopian future.

‘C’ showcases Haino’s use of atonality, it has a particular rhythm and note choice to it that’s utterly unique to him; it’s not any specific scale or mode but it almost sounds like it is, as there’s clearly a method to the madness. If I had to say what the signature Haino sound is I’d say it’s this. Ideas and motifs that Pauvros introduced earlier are alluded to by the synthesizer, something that’s prevalent throughout the album and that is emblematic of the group’s chemistry and experience working together.

‘D’ is a continuation of ‘C’, a moment of calm and a dialogue between Haino’s guitar and what appears to be a sample of a dog barking.

‘E’ gets more intense and physical. Sato’s playing isn’t snare-heavy but when he decides to hit it it really shakes the room. As Pauvros’ guitar transforms back into a violin Haino leaves his for a moment, hooking a microphone to his pedalboard (another Haino staple) in what appears to be a deliberate nod to Foussat’s vocals earlier.

‘F’ is the turning point of the evening (and album): the physicality that has been with the band since the first note was played starts to fade and everything gets progressively more abstracted. The synth is forepoding and menacing, Sato’s playing is more atmospheric than rhythmic and the guitars are under so many layers of effects that are now a thick wall of sound.

On ‘G’, Haino starts singing in his high pitched shamanistic style. It’s just a short section, and idea, but it influences Pauvros’ playing and the tone of his guitar for the next few minutes, in which he embraces the ritualistic Haino mood set. Foussat and Sato follow the two guitarists in stride, introducing more and more tension as the music gets more psychedelic and feels like leaving your body and starting to float ever up, an ascension that appears like it will never end.

‘H’ is the place this ascension takes you to, a barren (not in a bad way) and uncanny place shepherded by Haino’s ghostly vocals once more.

The sparseness is wrested away from the listener on ‘I’ as the whole band comes back in a whirlwind of distortions and busy and intense drumming that segues into ‘J’, still relentless at first but as it eventually dies down Haino sings one last note , the last sound you hear in this delicate balance of tension and release that has been listening to the album.

The journey is over and the group is done. On Fin Pauvros presents the band one last time and they leave as the audience cheers.

This is probably my favorite release of the year so far. A fantastic document of a trio at the top of their game, not only in perfect synergy with each other but also able to accommodate the inclusion of a giant like Haino without even batting an eye. It’s available on CD from Fou Records in Europe, Squidco in the US, and of course in digital format on Bandcamp. I know this was an unorthodox review but I felt it was the best way to show my enthusiasm for this album and I hope that if anything I mentioned sounds interesting you’ll give this great piece of live music a listen. I’ve been listening to it regularly and I keep finding new things to be excited about under the countless layers of sound and I hope you’ll find it as rewarding as I do.